The Junebug ArtFest could not have grown as it has without the generosity of a multitude of people. Since everyone who collaborates on the Junebug is a volunteer, the following are the “local folks” who are willingly donating hundreds of hours to discussion, planning, organizing, phone calling, and computer work to make each year’s ArtFest a reality.

We would like to introduce them to you and give you a glimpse of their connections and contributions to the arts.

Roxy is a Metuchen resident and artist. She designs handmade jewelry and teaches jewelry making. In addition, she works with Special Needs Students at our local Elementary School in Metuchen. She is a first-time member of the Junebug Committee in 2017 and also serves as one of the volunteers during Junebug evenings, assisting visitors and artists.

Amy is a glass and metal artist who works from her studio, Paradise Custom Glass, in Metuchen. She constructs custom stained glass windows for residential & business customers as well as sculptures that feature copper and steel with glass. She displays her artwork in galleries across the state. Amy is also a member of the Borough Improvement League and is the current co-curator of Transformations Gallery located inside the Old Franklin Schoolhouse.

I currently serve as the the Chairperson for the Junebug ArtFest and head up a planning team that organizes this annual visual and performance festival in Metuchen. I also have been a member of the Metuchen Arts Council for the past 3 years.

I am a Metuchen-based artist who creates paintings and sculpture art. My paintings are mostly in pencil and watercolor or acrylics. My sculptures are primarily clay but are sometimes combined with stone, wood, glass and metal. I also create hand drawn water colored landscape design plans. Eastern culture, landscapes, graffiti, modern architecture and the impressionists influence my work.

Kara is a Metuchen resident and artist who enjoys drawing, painting, and creating mixed media art. In addition, she is a practicing social worker.

Kara is first-time member of the Junebug committee in 2017 and is organizing the children’s activities for all four evenings of the ArtFest, including a featured “Junior Bug Kid’s Zone” event during street closure night (June 17th).

Mark Harris is a photographer from Edison. He specializes in straight, abstract views of objects in nature as well as the body. Having recently made the transition to a fully digital workflow Mark still presents much of his work in black and white while occasionally exploring color. He also still maintains a traditional darkroom which doesn't get as much use as it once did. Mark has served on the Junebug ArtFest committee for many years as part of the group that coordinates the visual artists. Mark has a variety of these images on his web site at: http://gsphotoguy.photography.com/

Audrey is a Metuchen Resident for more than ten years. She is the President of the MHS Parent Teacher Organization, serves on many volunteer committees in town and works at Campbell Elementary School. 2017 was her second year in a row as a member of the Junebug Planning Committee, where she helps to coordinate the “Host/Ambassador” program and work with volunteers of all ages who serve as guides and answer questions from festival visitors.

Dorothy and her daughter Nina have given many years as Junebug volunteers, but for the past two years, Dorothy has played a major role in assisting the Sponsorship Committee to raise funds for the ArtFest, reaching out to potential donors (both individual and corporate/business) and generating as much financial support as possible for this fantastic festival!

Professional web-designer and professor of all things “web”, Lauren not only produces, maintains and hosts our website, she also manages our social media tools and gives us monthly updates about our web stats. In short, thanks to Lauren, we are on the “cutting edge” of social networking! Lauren (AKA Lauren the Cartoon Goddess) received her BFA from Parsons School of Design and Masters from Syracuse University. She has been working professionally as a designer for over 25 years, specializing in web design production and digital media at LTCGmedia. In her spare time, she still paints and draws. Her work has been shown and sold in galleries, boutiques, cafes and restaurants. A graphic arts educator, Lauren has lectured, taught classes, given workshops presentations and seminars for illustrators, cartoonists, animators and designers at various universities and institutions of higher education. At present, she teaches web design and graphic design at Middlesex County College, DeVry University and duCret School of Art. She has been an active member of the Graphic Artists Guild since 1990, serving on local and national levels.

Tyreen Reuter has served in a variety of local volunteer leadership positions since moving to Metuchen in 1998, including President of the Borough Improvement League, Chair of the Historic Preservation Committee, Co-Chair of the Traffic & Traffic Advisory Committee, and as a Director in the Metuchen-Edison Historical Society. She was most recently employed as a Senior Architectural Historian at ARCH2, Inc., and previously as a Manager of Training & Organization Development at MTV Networks in New York. She attended Kent School for Girls in Connecticut, graduated from Hamilton College with a degree in Classical Studies in 1990, and completed the Drew University Historic Preservation Program in 2004.

Grace is Aide to the Chairman of The Citizens Campaign, a statewide non-profit organization that promotes participation in all levels of government. Previously she was Director of Artistic Administration at the McCarter Theatre Center in Princeton, NJ, a position she held for 19 years. Her responsibilities at McCarter included contracting, artist cultivation, community relations, board development, meeting and production coordination, staff development and the direction of the theater-wide internship program. Grace was assistant to the Broadway producer Richard Frankel at Richard Frankel Productions in New York City. She also served as Producing Associate for the Twilight Performing Arts Festival on the campus of the Bucks County Community College in Bucks County, PA. In the late 1960’s, she was a founding member of the Theatre Six Theatre Company in Metuchen, NJ. Grace currently serves on the Board of Crossroads Theatre in New Brunswick and is Chair of the Metuchen Arts Council. She has B.A. degree in Theater Administration from Rutgers University and lives in Metuchen, NJ.

Roman Stefaniw, a Metuchen graduate and resident, has been involved in art and music most of his life. From playing SXSW in Austin in 2006 to painting a mural for the US Army Reserve in 2016, he shows no signs of slowing down. He is also a member of the Metuchen Arts Council and the MDA Design Team.

Inspiration for the Junebug surfaced in Linda’s studio in the Fall of 2007. She carried the germ of the idea to the Metuchen Chamber Administrator, who then pointed her to the Metuchen Cultural Arts Commission. There was immediate responsiveness to the idea in both the business and arts communities, and very quickly an exciting collaboration was born. As the artist-owner of Earthsongs: Works in Clay, Linda is deeply interested in helping to make Metuchen an arts-destination. With an MFA in painting and ceramics, Linda has been involved in the arts her whole professional life. Beginning this year 2014, her studio is heading up Metuchen Arts Council’s Mud Making Magic four-year Public Mural Project. (https://www.facebook.com/mudmakingmagic.org) Linda’s website gives a broad overview of the kind of work she has produced in the past and continues to develop; visit it at: www.CLAYSONGS.com. For very regular updates, images and comments about what’s doing at the studio, visit the studio’s Facebook Page.

Margo received her BA from Colgate University in philosophy and her Masters in Communications Design from Pratt Institute. While having begun her career in advertising, she has focused on graphic design for the past 15 years. She established Bounce Design in 2003 and has created many of the designs you see around town. Some of her local projects include designs for the following: Fuce5K, Bike-Walk Metuchen, Metuchen Education Foundation, the Metuchen Democratic Party … and of course, the Metuchen ArtFest, including the program, street banner, lightpost flags, and flyers. She is also the chairperson of the Metuchen Municipal Pool Commission. Margo and her family have been Metuchen residents since 2000. Margo is currently the creative director at Closet Complete, a division of Prime Line Packaging.

Metuchen has always been home to Dottie and her family. Never one to watch from the sidelines, she has always been active in town and a member of the Cultural Arts Commission for many years. Watching the growth of the Junebug Artfest over the past 6 years is truly wonderful and gratifying - BUT it doesn’t happen without help from everyone in Metuchen – businesses and residents alike. Dottie has an unwavering love of the arts, but her talents lie in the business arena, those talents have been put to the test these past few years to raise the funds needed to allow Junebug to continue to be the exciting presence in our downtown every Friday in June. Since opening Winhold Realty in 1982, to now managing Prudential NJ Properties, it has been all about people and relationships for almost 30 years. Having made so many friends in Metuchen made her the obvious choice to call upon everyone who enjoys this wonderful event and ask for their help to make it happen – yet again.

Word about the ArtFest would not be spread without the ongoing efforts of Lynda Woodworth. A professional communications consultant, Lynda has leveraged her writing skills and publicity know-how to promote the ArtFest to the art community and the general public since 2009. She has several years of communications experience in the corporate, non-profit, and agency sectors and enjoys working in a team environment to broaden the reach and audience of the Junebug. Additionally, Lynda is an accomplished painter, specializing in watercolor and liquid color inks. She is a regular student at the Academy of Art in Highland Park and has worked with academy director Ana Eloisa Soto-Canino for the past several years. She is joined by her son Jackson Costello at weekly studio classes and in showcasing their work at the annual ArtFest. Click here to access her family’s on-line art studio: http://www.costwoodstudio.com/. 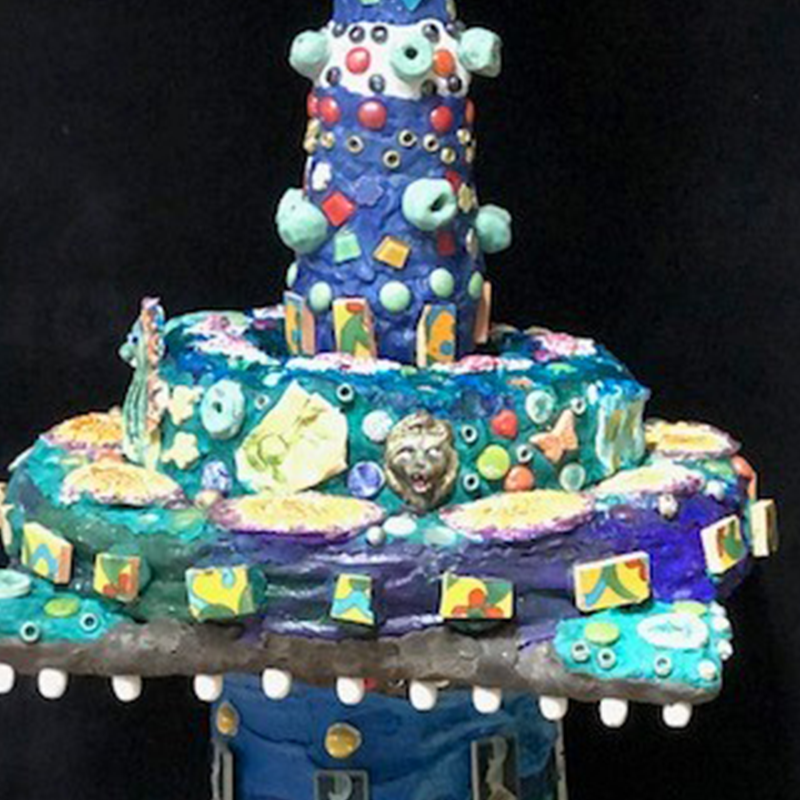 Volunteer. Get a shirt.

We are seeking community members to help visitors find their way around the ArtFest, no artistic talent required! See the volunteer page for more info.